Model Rocketry and free speech, what could be better?
http://forum.starportsagitta.net/

by Joe Wooten
Well, yesterday I did do a launch with the scout troop to help them get their space exploration MB. The wife came along and got a few good pics....

The weather was perfect when we started. The only bad spot was a low (1000-1500 ft) overcast, but there was absolutely NO WIND. The boys had built Alphas and I had them use A8-5 engines.

First boy up. I showed each one how to prep for flight, put it on the rod and hook up the igniters to the launcher leads. After that, they were good Scouts and did not have to be watched that closely, and all of them did a good job of following the range rules and launching their rockets. 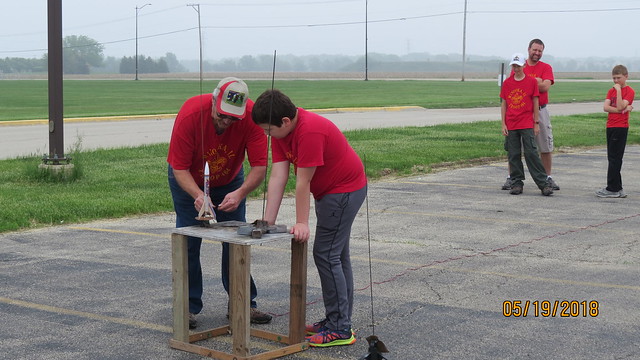 by Joe Wooten
I posted the pic of the remains of an E60 launch in another topic.....

by Commander
Nice pics Joe! The next time you have one of these, let me know ahead of time and I might have some Starport Sagitta Rocket Logs for the scouts so they can record their flight information.

by Joe Wooten
Sure. There were several boys who missed this launch, so we'll do another later this summer.
All times are UTC
Page 2 of 2
Powered by phpBB® Forum Software © phpBB Limited
https://www.phpbb.com/